Seralite® – FLC Serum* utilises highly specific, anti-K and anti-λ monoclonal antibodies (mAbs) which are conjugated to gold particles and incorporated into a simple to use lateral flow device.

Sample, and the mAb gold conjugate flow through a membrane containing two test lines, one pre-coated with purified Κ FLC and the other with purified λ FLC. A third line made up of immobilised biotin acts as a control line. Inhibition of mAb-gold binding to the test lines indicates the presence of FLC in the sample. 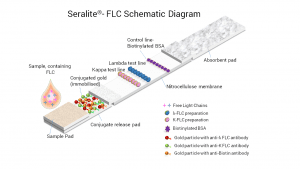 After ~10 minutes the sample is analysed on a CE marked lateral flow assay reader (ADxLR5® Reader System) which reads the results of the device, quantifies the kappa and lambda FLC and calculates the ratio of Κ/λ FLC.

Contact us
*Not available for sale in the USA
We use cookies to ensure we give you the best experience on our website and for personalised advertising. Click continue without changing your browser settings if you are happy to receive all cookies on the Abingdon Health website. However, you can change your cookie settings by consulting the help menu in your internet browser.