Latest News Over £600 raised for charity partners in 2015
Share

Abingdon Health is pleased to announce they have raised just over £600 for their charity partners, York Sands and Birmingham St Mary’s Hospice.

York Sands are in the process of raising £30,000 in order to furnish a new room, at their bereavement suite in York Hospital. A cheque for £500 was presented by Abbas Din of Abingdon Health to Kim Milner of York Sands (See main picture) during Abingdon Health’s company day in York. It was great to know that the money raised during the Freya Din Football Tournament will go to furnishing the new room in their bereavement suite.

On 11th December Abingdon Health’s Birmingham office organised a successful Purple Friday event. Abingdon Health staff were asked to come to work wearing purple and asked to donate £2, or as much as th 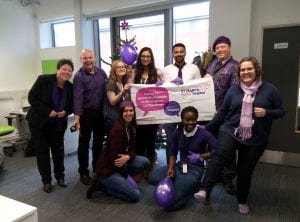 ey could to raise money for Birmingham St Mary’s Hospice. A total of £110 was raised on the day.

It is clear from this image the team had a great day. More images from both events can be found on Abingdon Health’s Twitter page.

Abingdon Health Ltd (“Abingdon”) is pleased to announce it has been selected by the UK Government to add industry insight in the Healthcare...

A rapid test aiding the diagnosis and management of myeloma patients

As World Blood Cancer Day approaches Abingdon Health looks at blood cancers and how they manifest themselves. In addition, we examine how an...