Preliminary report of an independent evaluation of AbC-19TM

The independent report compares the Roche and Abbott immunoassays to detect SARS-CoV-2 antibodies, alongside the EuroImmun IgG SARS-CoV-2 ELISA, across a large cohort of plasma samples from Northern Ireland in addition to the AbC-19TM lateral flow rapid test.

The researchers comment on the limitations in testing availability and known issues with viral detection by RT-PCR alongside the complexities of T cell and B cell immune responses with concerns raised over lack of an IgG response or indeed an IgG response to an alternate antigenic portion of the virus. They also describe the lack of a well-accepted gold standard assay against which to measure any newly developed immunoassay designed to detect antibodies to SARS-CoV-2.

To overcome these challenges, a ‘pseudo gold standard’ system was established against which to analyse the sensitivity and specificity of each of the three commercially available immunoassays using a well characterised serology sample set to evaluate performance metrics for the AbC-19TM test. 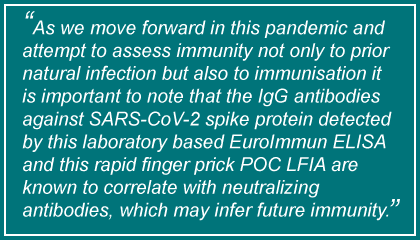 *Further independent evaluations are being conducted by several academic groups and healthcare agencies and the UK-RTC and its members look forward to the publication of these independent assessments in due course. The timing of these publications remains at the discretion of the research groups involved. Earlier studies from analysis of samples at Ulster University and additional samples analysed at Abingdon Health’s laboratories had shown similar performance characteristics.

Introduction of an App that transforms a Smartphone into a rapid analytical tool Abingdon Health is pleased to announce the launch of AppDx®,...

Abingdon Health (“Abingdon”) is pleased to announce it has been awarded a grant by Innovate UK to develop an on-farm multiplex rapid test...